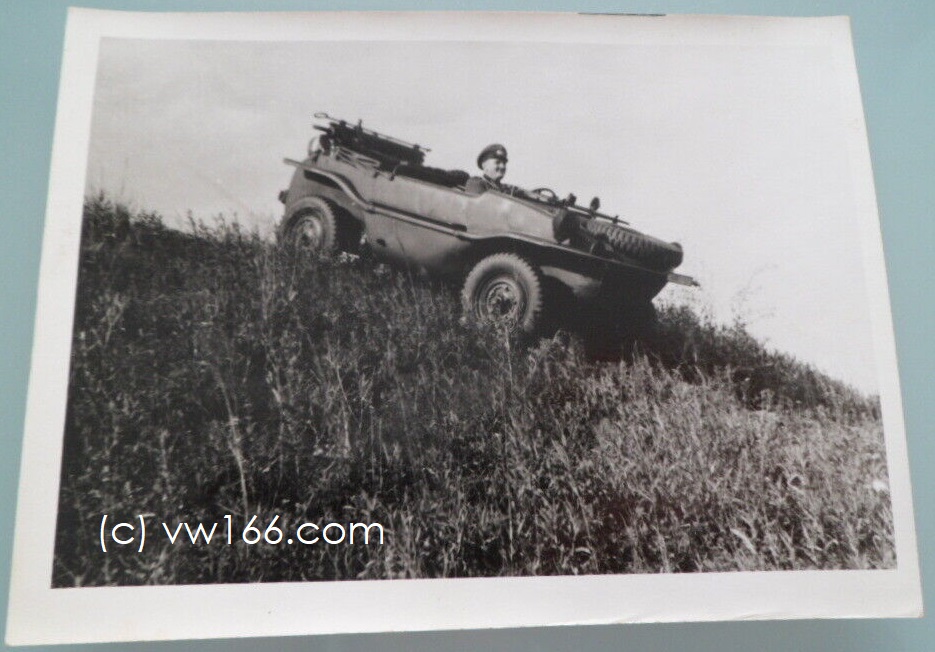 Development of the VW-Schwimmwagen type 166

Ferdinand Porsche saw the potential of creating an amphibious version of the VW Kübelwagen (type82). The German Army was searching for a vehicle which could perform in difficult conditions such as snow, sand, mud. He combined these qualities and added all-wheel drive which had been developed at about the same time for the VW (type87). The development project was called the type 128 which appeared in 1940.

Thirty examples were built in 1941 at the Wolfsburg Volkswagen Works and delivered to the Army's Engineer units. The type 128 had a boat-shaped body. The army was impressed and consequently Porsche received instructions in 1941 for further development of the type 128.

The type 138 was a type 128 but then with a little modified body it seems (version type 128 B). Some 100 more vehicles of this type were ordered. Another special version was produced type 129, probably a complete closed vehicle which could deliver bombs without a driver. The 129 type was not a success and didn't go further than prototype stage.

By the end of September 1940 the type 128 prototypes were tested in the lake called Max-Eyth near Stuttgart.

One could select 2 or 4 wheel drive in the type 128. The car had a gearbox with 4 gears and with 2 sperr-differentials and a powertransmission to the front wheels.

Ferdinand Porsche felt that the type 128 was too large and so unstable. Therefore, Porsche started to create a smaller and more agile Schwimmwagen, which resulted in the project: type 166.  The first 125 vehicles were produced by the Porsche Team and they were hand-made in Stuttgart. These cars are also known as "Vorserienschwimmwagen" or preseries Schwimmers.

The type 166 entered large-scale production in Wolfsburg (or "Stadt des KdF-Wagens", City of the Strenght Trough Joy Car). The mass-production model, is the "VW-Schwimmwagen" we know today, possessed a wheelbase which was 40 cm shorter than the earlier type 128. Also, the vehicle's width had been reduced by 10cm. There were some small body modifications done as a result of the army-tests. The tow hooks for example received reinforcements on early 1943 Schwimmwagens as the tow hooks could deal with a great pulling force. The type 166 was powered by the same 1131-cm3 engine.

In the water the engine drove a three-bladed propeller at the rear of the Schwimmwagen. The type 166 was very popular, mainly because of the off-road capabilities thanks to its four wheel drive and the low gear ("Geländegang"). Its amphibious capability was rarely used in action. It is difficult to confirm but it is said that in World War II the Schwimmwagen had lifespan of only 6 weeks. Whilst this cannot be verified, one can imagine that reconnaissance troops faced a lot of enemy contact and were particularly vulnarable.

The production stopped in 1944, because of the large number of man-hours involved in the production, the high material usage as well as destruction of the factory due to allied attacks. In 1945 and 1946, the British built six Schwimmwagens using spareparts that were left at the factory.

A little over 14.000 Schwimmwagens were built. After the war, the Schwimmwagen was used by the local Police, firebrigades and mostly by farmers. Some people even cut doors in the body in order to obtain an easy entrance to the vehicle. Many vehicles were destroyed as new vehicles became available, however, some enthousiasts appreciated this unique vehicle and kept them for the next generations.

Today, the VW-Schwimmwagen is relatively rare with about 500 vehicles being estimated to be still in existance. In recent years, several complete bodies have been newly fabricated in the Czech Republic and in Germany, due to high demand by enthousiasts.